Mercilessly, huge celestial objects penetrate deeply into the Earth’s planetary surface and destroy large parts of the mantle. Humanity is momentarily overwhelmed; life evaporates within a wide radius of the impacts. There can be no security from such danger, and there never was. Impactors The world is in the midst of being destroyed by a perpetual bombardment from the depths of the universe. Almost all forms of life on the planet have been destroyed. Civilization has been pulverized and all has sunk into magma and ashes. The age of human arrogance is over. Yet, even where death seems inevitable and […]

Intense, diverse, unpredictable - when it comes to defining AEONS CONFER's musical endeavours, one will be most quickly stretched to one's limits of comprehension. What started as the brainchild of brothers Simon and Nils Wrobel eventually in 1997 in Hamburg, Germany, with one ferocious and black metal-soaked song called "Fallacy Of Faith" revering the then genre-defining Emperor, has evolved into a gigantic musical monster with their current album ZERO ELYSIUM in 2019, running rampant through genres like technical death metal, extreme metal, and even djent and symphonic metal, without stipulating one single genre definition.

Preceeding ZERO ELYSIUM, the dystopian concept album SYMPHONIES OF SATURNUS put AEONS CONFER on the map of the world in 2013 with one single stroke as a force in extreme metal to be reckoned with. The album manhandled the band on huge festivals like Summer Breeze (GER), Metal Days Slovenia or Tuska in Finnland, sharing stages with acts like Ensiferum, Abbath, Lamb of God, Fear Factory, In Flames, Devin Townsend, Cannibal Corpse, Arch Enemy, Sepultura and many more. Now, ZERO ELYSIUM will open up new perspectives, not only for the band but also for the listener.

"After SOS (SYMPHONIES OF SATURNUS) exploded into the scene and gave us many possibilities to show what we have to offer as a live band, we spent the last 3 years preparing this record. It was debilitating to say the least, as we did not want to hand over the reins in any aspect, be it the sound or visualization of ZERO ELYSIUM. The result of all the hard work will speak for itself", sums up chief composer, lead guitarist and producer Simon Wrobel. Together with Nils Wrobel (Drums), Bernhard Rigelsky (Vocals & Bass) and Alexander Guth (guitars), Simon imposed the task of exceeding the nearly 80 minutes-long colossus SYMPHONIES OF SATURNUS, which received raving reviews in the metal community. As a sworn-in band of musicians, AEONS CONFER advected all of their energy into producing ZERO ELYSIUM, which showcases not only their high level of musicality and technical proficiency, but also their farsightedness and attention to detail.

"ZERO ELYSIUM is very different from SOS in almost every aspect, which was far from intentional. We still know who we are, and it will become apparent when listening to ZERO ELYSIUM. Still, you will also hear a significant evolution of us as a unit of musicians and artists, which in result will command the listener's attention", states singer and bassplayer Bernhard. „It would have been too easy to rest on one’s laurels and re-do the things we have done in the past. Furthermore, where is the point in biasing towards a certain black metal or death metal genre, without adding any new musical perspectives? AEONS CONFER is capable of so much more!“

Therefore ZERO ELYSIUM, which was completely self-produced in AEONS CONFER's own studio, is not just another disc in the band's catalogue after "The Soul of the Universe" (2003), "Mirror's Heart" (2004) and "Symphonies of Saturnus" (2013), it is a statement. „This is not a SOS Part II, but a whole new experience and most certainly a culmination of what AEONS CONFER is all about in the year 2019.“ says drummer and also producer of the band's music videos Nils: "Be it intense technical, death metal-like guitars, opulent soundscapes reminiscent of progressive metal or industrial metal, or even higly complex drum breakdowns accentuating the Djent genre, our music has it all. There's certainly something for everybody to be found on ZERO ELYSIUM. So no matter which type of exreme music you might prefer, you will get your fix", he adds.

ZERO ELYIUM will add a new dimension to extreme metal, so be aware of this juggernaut of a record, which is now available on CD, LP and via all common digital vendors like iTunes, Google Play, Bandcamp or Amazon. 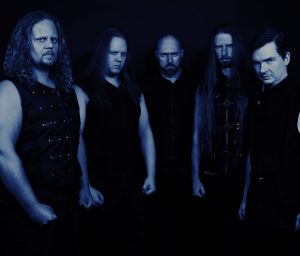